Born in California in 1961, Mary Tuma began sewing and crocheting with her mother at an early age. Her love of these processes led her to begin her formal study of art as an apprentice at Beautiful Arts Hall in Kerdassa, Egypt, where she learned to weave tapestries. Later, she earned a Bachelor’s degree in Costume and Textile Design from the University of California at Davis, and then went on to study women’s fashion design at the Fashion Institute of Technology in New York. In 1994, she earned a Masters of Fine Arts degree from the University of Arizona. 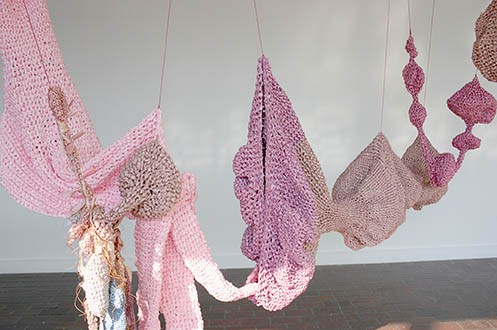 My work addresses issues of the transformation of the body and the spirit through the use of clothing forms applied to found objects or placed within a contextual environment. The use of old fabrics and found objects is important in creating a work or environment that evokes a feeling of loss, or distant memory. I am interested in the sorting of images from the past, images that are like shadows or ghosts, something not quite whole and no longer real but still of great influence and power. 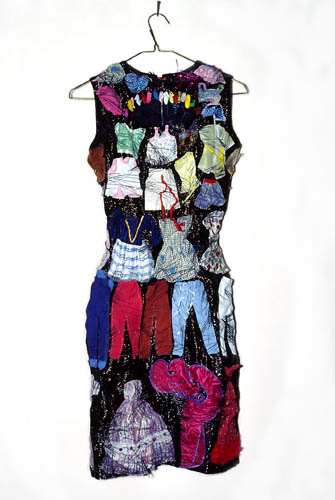 In most of these works there is evidence of loss—an allusion to the passing of time; a vacant space within a form once occupied; an identity that merges fully with it's environment. To speak of this loss, I superimpose worlds. "Bodies" of sorts are caught up in unmistakably alien forms that speak of our transformative nature. A "skeletal" object or structure, which provides a context and framework, is redressed within a sheer, ghost-like skin: the resulting forms are like skins and bones—the interior and exterior of one possible system.

There is an intangible "place" where the body becomes an emotional landscape. Though I cannot define this, it is a goal of the work to describe that place. Ideally, this leads to work both mournful and humorous, simultaneously real and surreal.

Yazid Anani is an assistant professor at the Department of Architecture and Master Program in Planning and Landscape Architecture- Birzeit University, and the current head of the academic council of the International Academy of Art Palestine. His work and research interests are in colonial & post-colonial spaces as well as themes in architecture and power.