Art and Architecture Circa 1500 A.D.: China and Japan

The early Ming emperors supported the sea trade developed under the Song, though they ruled a larger territory than had the Song and took less interest in sea trade as a source of revenue. Further dangers threatened from the north and west, and in 1433 the emperor banned Chinese traders from travelling abroad, with the result that trade passed to foreign merchants. 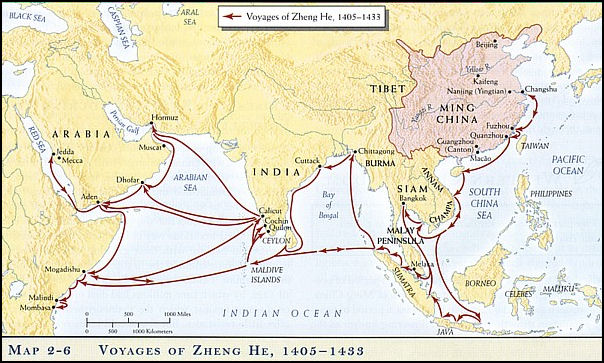 China thereby lost an essential stimulus, while Europeans moved into the vacuum. Portuguese and Dutch bases were established in Macao and Taiwan (Formosa), but quickly faced competition from the Spanish on the Philippines and the British in India. Religious as well as commercial rivalry accompanied the Europeans, with the dominant opportunism of the Portuguese- and French-backed Jesuit mission to China being challenged by Spanish support for the Franciscans and Dominicans.

The founder of the Ashikaga dynasty, established his headquarters in the Muromachi section of Kyoto. Under Ashikaga leadership, political power was held in a delicate balance between members of the family and their key vassals (shugo). 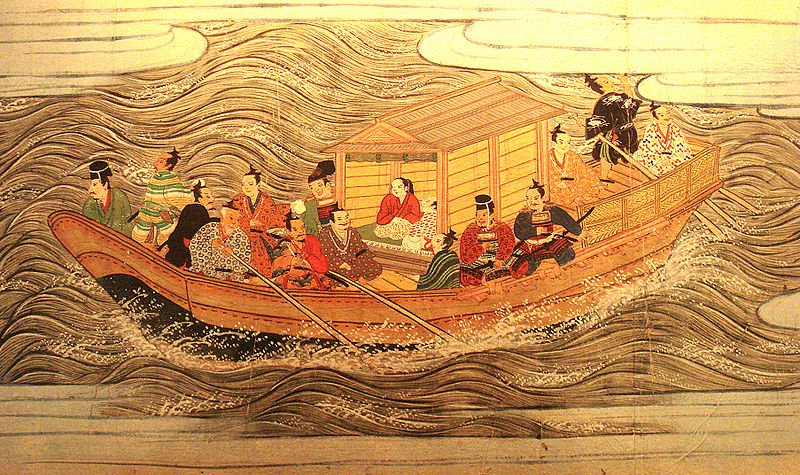 Three Ashikaga shoguns, Takauji, Yoshimitsu (1358–1408) and Yoshimasa (1435–90), were the most influential patrons of culture and the arts during this time. Takauji renewed formal contacts with China and imported wares from the new Ming dynasty (1368–1644), creating a new enthusiasm for Chinese arts and culture. Several Zen Buddhist temples in Kyoto, among them Myōshinji, Tōfukuji, Shōkokuji and Daitokuji, served as centres of Chinese learning, poetry and suibokuga (Chinese-style landscape painting in monochrome ink).

Yoshimasa built a retirement villa in Higashiyama, where his cultural patronage and connoisseurship more than compensated for his failure to hold Ashikaga power intact. He gathered around him a number of skilled artists and craftsmen—nō performers, masters of the tea ceremony, potters, garden designers, painters of suibokuga and connoisseurs of Chinese objets d’art. From these gatherings emerged a brilliant synthesis of aristocratic, military and Zen values that became one of the most enduring traditions in the whole of Japanese cultural history.

Calligraphy, or the art of writing, was the visual art form prized above all others in traditional China. The genres of painting and calligraphy emerged simultaneously, sharing identical tools—namely, brush and ink. Yet calligraphy was revered as a fine art long before painting; indeed, it was not until the Song dynasty, when painting became closely allied with calligraphy in aim, form, and technique, that painting shed its status as mere craft and joined the higher ranks of the fine arts.

Read more about calligraphy in China

Zen and Art in Japan

Zen traces its origins to India, but it was formalized in China. Chan, as it is known in China, was transmitted to Japan and took root there in the thirteenth century. Chan was enthusiastically received in Japan, especially by the samurai class that wielded political power at this time, and it became the most prominent form of Buddhism between the fourteenth and sixteenth centuries. The immigrant Chinese prelates were educated men, who introduced not only religious practices but also Chinese literature, calligraphy, philosophy, and ink painting to their Japanese disciples, who often in turn traveled to China for further study.