The theory of the animated cartoon preceded the invention of the cinema by half a century. Early experimenters, working to create conversation pieces for Victorian parlours or new sensations for the touring magic-lantern shows, which were a popular form of entertainment, discovered the principle of persistence of vision. If drawings of the stages of an action were shown in fast succession, the human eye would perceive them as a continuous movement. One of the first commercially successful devices, invented by the Belgian Joseph Plateau in 1832, was the phenakistoscope, a spinning cardboard disk that created the illusion of movement when viewed in a mirror. In 1834 William George Horner invented the zoetrope, a rotating drum lined by a band of pictures that could be changed. The Frenchman Émile Reynaud in 1876 adapted the principle into a form that could be projected before a theatrical audience. Reynaud became not only animation’s first entrepreneur but, with his gorgeously hand-painted ribbons of celluloid conveyed by a system of mirrors to a theatre screen, the first artist to give personality and warmth to his animated characters.

From the Encyclopedia Britannica 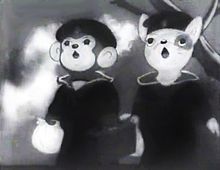 Anime, style of animation popular in Japanese films. Early anime films were intended primarily for the Japanese market and, as such, employed many cultural references unique to Japan. For example, the large eyes of anime characters are commonly perceived in Japan as multifaceted “windows to the soul.” Much of the genre is aimed at children, but anime films are sometimes marked by adult themes and subject matter.

From the Encyclopedia Britannica

Because of the stylistic similarities between comic strips and early animated movies, cartoon came to refer to animation, and the word "cartoon" is currently used in reference to both animated cartoons and gag cartoons. While animation designates any style of illustrated images seen in rapid succession to give the impression of movement, the word "cartoon" is most often used as a descriptor for television programs and short films aimed at children, possibly featuring anthropomorphized animals, superheroes, the adventures of child protagonists and/or related themes.