Ebooks from the library's online catalog: 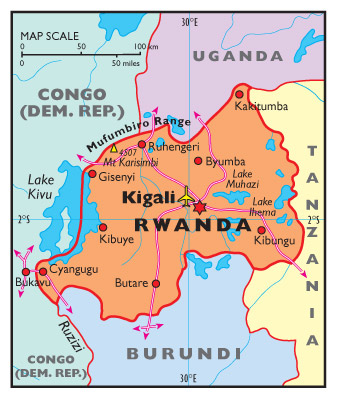 The Twa, the original inhabitants of Rwanda, were followed (c.a.d. 1000), and then outnumbered, by the Hutus. In the 14th or 15th cent., the Tutsis migrated into the area, gained dominance over the Hutus. By the late 18th cent. a single Tutsi-ruled state occupied most of present-day Rwanda. It was headed by a mwami (king), who controlled regionally based vassals who were also Tutsi. They in turn dominated the Hutus, who, then as now, made up the vast majority of the population. Rwanda reached the height of its power under Mutara II (reigned early 19th cent.) and Kigeri IV (reigned 1853-95). Kigeri established a standing army, equipped with guns purchased from traders from the E African coast, and prohibited most foreigners from entering his kingdom.

Nonetheless, in 1890, Rwanda accepted German overrule without resistance and became part of German East Africa, however, the Germans had virtually no influence over the affairs of the country and initiated no economic development. During World War I, Belgian forces occupied (1916) Rwanda, and in 1919 it became part of the Belgian League of Nations mandate of Ruanda-Urundi (which in 1946 became a UN trust territory). Until the last years of Belgian rule the traditional social structure of Rwanda was not altered; considerable Christian missionary work, however, was undertaken.

In 1957 the Hutus issued a manifesto calling for a change in Rwanda's power structure that would give them a voice in the country's affairs commensurate with their numbers. In 1959, Mutara III died and was succeeded by Kigeri V. The Hutus contended that the new mwami had not been properly chosen, and fighting broke out between the Hutus and the Tutsis (who were aided by the Twa). The Hutus emerged victorious, and some 100,000 Tutsis, including Kigeri V, fled to neighboring countries. Hutu political parties won the election of 1960; Grégoire Kayibanda became interim prime minister. In early 1961 a republic was proclaimed, which was confirmed in a UN-supervised referendum later in the year. Belgium granted independence to Rwanda on July 1, 1962.